Abstract submitted for the conference Scholarship and Intellectuality among the Lithuanian Jews. 18th to 20th Century to be held on April 21-22, 2020, in Vilnius, at the Martynas Mažvydas National Library of Lithuania. 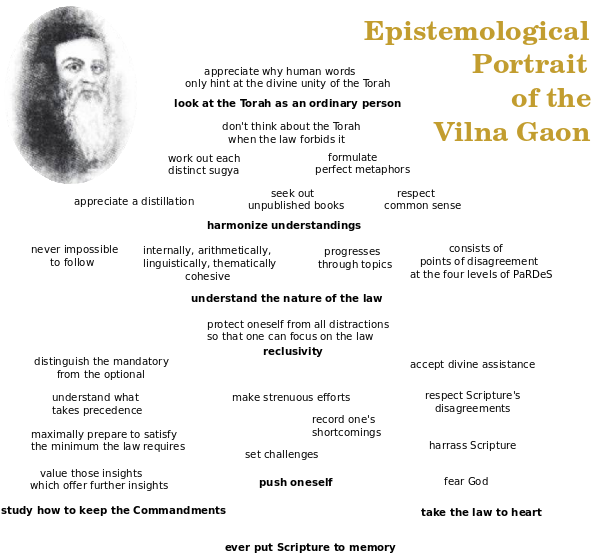 The Vilna Gaon's Reclusivity as the Magnificence of Lithuanian Civilization

Our epistemological portrait of the Vilna Gaon manifests the virtues of the Grand Duchy of Lithuania. We systematize 24 ways that he figured things out in the Torah as well as in his own life. He begins by ever putting Scripture to memory. His learning cycle has him set challenges, make strenuous efforts, and record his shortcomings. He takes the law to heart, fearing God, harassing Scripture, respecting its disagreements, and accepting divine assistance. In keeping the commandments, he is smart, valuing those insights which offer further insights, maximally preparing to satisfy the minimum the law requires, understanding what takes precedence, and distinguishing the mandatory from the optional. This all comes together in his reclusivity, protecting him from all distractions so that he can focus on the law. He understands the law as never being impossible to follow, as internally, arithmetically, linguistically, thematically cohesive, as proceeding through a progression of topics, and as consisting of points of disagreement at the four levels of PaRDeS. He harmonizes these four levels in six ways by appreciating a distillation, working out each distinct sugya, seeking out unpublished books, respecting common sense, formulating perfect metaphors, and not thinking about the Torah when the law forbids it. This all brings him to look at the Torah as an ordinary person, who as such appreciates why human words only hint at the divine unity of the Torah. Hasidism hails the extraordinary, whereas traditionally the Litvak, like the ethnic Lithuanian, is ordinary, down-to-earth, skeptical, suspicious, factual, rational, open, stubborn, bitter, content, modest, bland, quiet, simple, withdrawn, common folk. The Vilna Gaon's reclusivity was possible in a sufficiently tolerant family, community, culture and state. They let him be. He was the crown jewel of the Grand Duchy of Lithuania.