Why, intuitively, are there 4 classical Lie groups/algebras?

I am deriving the answer from the 4 different kinds of symmetries inherent in choice. These yield the following four interpretations of the binomial theorem in terms of polytopes:

I need to relate these to the ways of linking up two sequences. Linking ...XYZ and ...ABC can have the following solutions:

and this lastmost statement is an equivalence, thus this is a context for defining equivalence.

In geometry, rotating by 90 degrees makes for independence. So the root systems impose this on the algebra.

If I make three choices, then a fourth choice "left" makes a difference; whereas a fourth choice of not choosing makes no difference - the center of a triangle stays the same no matter how many dimensions you add.

Lie algebra linking - is given by placing a cube on its corner and projecting its vertices onto the plane, yielding A2.

Note that ← and → add to yield paths. They are within the same system. Whereas \ast and \ast are in different systems.

Crucial fact is its about the inherent geometry in sequential choices. (Choices made one-by-one as opposed to being made all at once.)

Slack lets you turn around.

A coordinate system (sliced cube) has each vertex face in two directions (left and right). But in a simplex the vertices face in only one direction (outside not inside). (Compare with hyperoctahedral group in terms of shuffling cards with two sides.)

The choice itself is different ... or what is chosen (this or that)?

Observer and observed. An observer waits for the answer. The observed doesn't wait - it has no concept.

Note that the infinite paths down Pascal's triangle correspond to the real numbers from 0 to 1 in base 2.

How is Pascal's cone - the circular row - related to a finite field? and how it changes with q?

Is it closing a cycle? Or is it turning counting around, as when facing God and turning around to view with him?

Counting Young diagrams: Having empty outer column vs. having nonempty bottom row. How does the q-analogue work?

Write up: Conjugation is relabeling.

Projective linked by adding an extra point - infinity. Affine - internal zero - what would that mean? 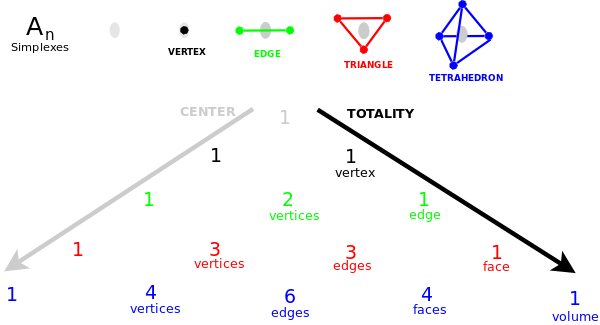 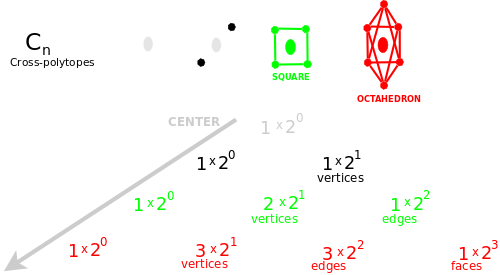 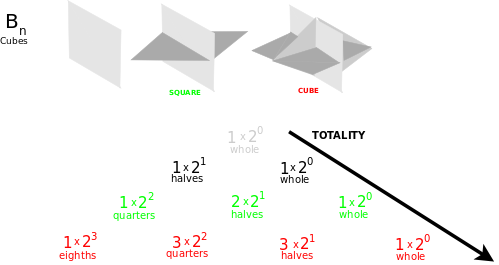 M M* = 1 This gives a structural, geometric interpretation for an involution - there is natural symmetry in the form of a matrix - like the root systems - and the point of having orthogonality, orthonormality - a set of combinatorially nice, independent basis elements to work with

How do cross-polytopes and cubes get distinguished as odd and even?

Compare with my interpretation of Clifford algebras.

Look for connections with Bott periodicity.

What is the meaning of a root, a transposition (ij) for An, given the choices between * and (1,2,...n)? What does it mean to relate two choices?

How does this all relate to the Axiom of Choice, in particular, indexing over known dimensions or all possible dimensions?