Investigation: Understand mathematics as the discrimination of a variety of dualities.

I am studying the various cases of duality in math. I imagine that at the heart is the duality between zero and infinity by way of one as in God's Dance. Duality is the basis for logic, and mathematics gives the ways of deviating from duality. Duality is also the structural mirror established within the foursome, fivesome, sixsome and sevensome.

Duality arises from a symmetry between two ways of looking at something where there is no reason to choose one over the other. This is driven by the sevensome in defining logic as the balancing of the conscious (not known) and the unconscious (known), what is and what is not (but complements it).

Logic in Mathematics: The Kinds of Duality

Sources of examples of duality

Dualities in the symmetric functions: Elementary and homogeneous; Schur and power; monomial and forgotten? 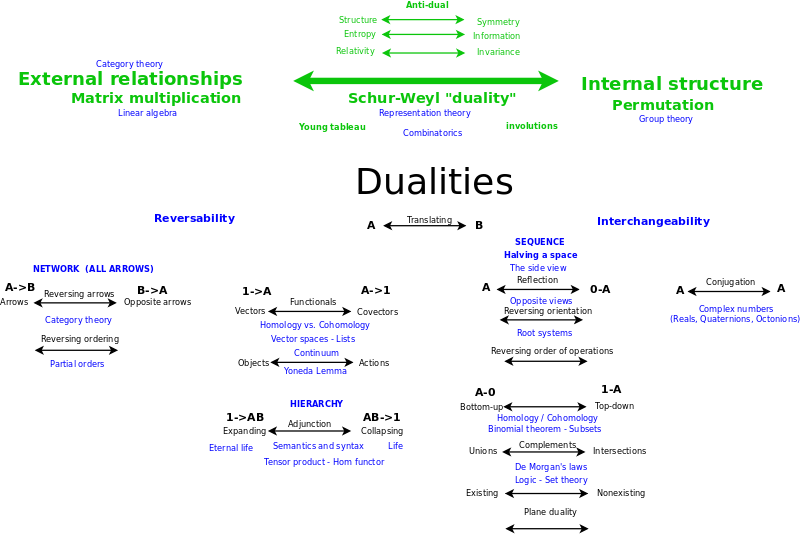 The duality between zero and infinity, between nothing and everything, is broken in many subtle ways. Here are some examples:

In Math, there is an everpresent tension between the notions of equivalence class and uniqueness. If something is mathematically significant, it should in some sense be unique. But math is a model and so, as such, can never be entirely unique but represents a variety of cases. Thus it is ever natural to define equivalence classes, especially in math itself. For example, a rational number is an equivalence class that establishes a proportion.

Ways of figuring things out

Duality in Mathematics and Physics by Sir Michael Atiyah

Note that turns left and right are conjugates but not a division of everything because there can be no turn. Instead, the twosome is "turn" (left/right) and "no-turn". "Turn" does not need to be marked, but "no-turn" needs to be marked ("no"). Although, content-wise, not-turning is unmarked and turning is marked.

Cohomology at nLab: Cohomology is dual to homotopy (as an operation): the cohomology of X with coefficients in A is the homotopy of A with co-coefficients in X. Cohomology should be thought of as "cohomotopy". For any {$A\in H$} the set {$H(S^n,A)$} is equivalently:

So I'm very interested where such dualities and opposites come up in math.