My latest answer as to why there are four classical Lie groups and algebras.

I asked this question at Stack Exchange

I will share the progress I have made in attempting to answer my question. So far this is mostly a collection of ideas. I need to learn more mathematics and connect the dots. I appreciate related thoughts.

Models of physics inspire mathematics, give meaning to it, and make it intuitive. Models of cognition could likewise, and arguably, even more centrally, in the case of models of cognition of mathematics. Algebraic combinatorics is a relevant approach where it tries to interpret algebraic truths so as to make intuitive sense of them and thus learn more from them.

The four classical Lie algebras and groups seem to express the symmetries of the possible mental interpretations of a product {$x_1 x_2 \dots x_n$}. I am investigating this idea in three related mathematical realms.

Let us be careful to distinguish two very different kinds of choices, symmetric and asymmetric.

In a symmetric choice, we are choosing between labels which can be switched around, as with "this" and "that". This is the case with an implicit choice, where you took one or the other possibility. In nature, you can observe that an electron moved {$\leftarrow$} "left" or "right" {$\rightarrow$}.

In an asymmetric choice, we ourselves make a commitment to one of the opposites which makes it syntactically different from the other. This is the case with an explicit choice, where we intentionally set the choice up so that either we accept the option, and mean "yes", or we explicitly reject it, and mean "no". This is the case when a scientist explicitly conducts an experiment and externally, on the metalevel, concludes that "something happened" or "nothing happened".

Mathematically, a series of three symmetric choices {$\leftarrow$} or {$\rightarrow$} yields the eight corners of a cube with dimensions 1, 2, 3:

Here {$\leftarrow$} and {$\rightarrow$} are simply semantic labels and in that sense the shape stays the same if we switch them all around. [Clarify.]

But a series of three antisymmetric choices {$\leftrightarrow$} or {$\varnothing$} ("vertex" or "no vertex") yields the subsets of the vertices 1, 2, 3 of a triangle:

In this case, we can't just switch all of our choices. In particular, the set of all vertices and the set of no vertices are two completely different shapes. Mathematically, it looks like we're just manipulating a pair of symbols, as before, and we are. The hitch is that in the previous case the opposites were syntactically similar, whereas here they are syntactically different. That's a mental distinction. Of course, we can lose that distinction by just thinking about the symbols in a different way. But the whole point in modeling cognition is to be careful not to do that. It's also a challenge to note these mental distinctions without having our own symbols affect our thinking.

Again, the subsets of a triangle's vertices form a poset where the inclusion is oriented (yielding flags). It relates absolutely distinguished and thus dissimilar concepts: all and none. Whereas the analogous relationship in the cube's coordinate system is nonoriented. It relates relatively distinguished and thus similar concepts: leftmost and rightmost.

In the case of the cube, we are enumerating sets of properties. Each set of properties establishes a vertex of the cube. If P is a property, then Not-P is likewise a property. The set of properties is considered as informative as the complementary set of non-properties. This is because each non-property directly yields a property. In the case of the triangle, we are enumerating sets of essences. If E is an essence, then Not-E is NOT an essence. A set of essences - a set of vertices - establishes a substructure of the triangle. Note that non-essences (the fact that a vertex is NOT in a substructure) are not deemed meaningful. Knowing that a vertex is not in structure tells me nothing about which vertex is in a structure. The knowledge of non-essences is informative only if I know all of the non-essences as well as all of the possible essences. A set of essences (what something is made of) consists of informative units in a way that the complementary set of non-essences (what something is not made of) does not. Thus properties and essences, as concepts, are based on these two very different worldviews.

[There are two other infinite families of polytopes. They can be interpreted as follows.]

[These interpretations distinguish the center and the whole, thus inside and outside. The meaning of center keeps changing and yet, in isolation, we think of there being one shared center - one shared absolute coordinate system. Whereas there is not one shared whole.]

[The syntactic distinction arises from the difference between no choices and all choices. There is a universally well defined set of no choices. Whereas there is no universally well defined set of all choices. Furtherhmore, we identify each set of non-choices with that set of no choices. If a don't choose something X times, then it is considered the same as having never made a choice. This reveals a syntactic distinction between choosing this and not choosing this.]

[The symmetry in an expansion is related to the questions of commutativity and associativity and other concepts that arise from the Cayley-Dickson construction.] 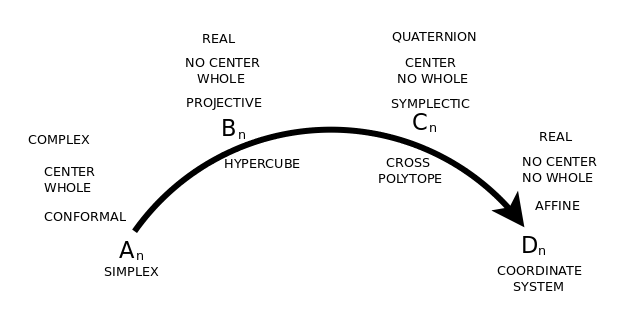 In counting, {$A_n$} does not distinguish between beginning and end, between forwards and backwards. Extension can take place in either end, in either direction.

[The whole is a pseudoscalar. Thus odd and even dimensions matter.]

Geometry can be variously conceived with the help of polytopes.

Going around a triangle can be conceived as:

Such geometrical concepts can be understood as grounded in the generating process of an infinite family of polytopes.

Curiously, this does not match with the evidence from the Lie groups {$A_n$}, {$B_n$}, {$C_n$} and {$D_n$}. They consist of those linear transformations of vectors which keep invariant the following notions of length:

If we consider the consequences (the fullness) of the polytopes, then we may find a connection with the geometries. The cross-polytopes describe surface area and are thus symplectic. The hypercubes describe how a vantage point at infinity manifests itself, and so they are projective. The coordinate systems apparently get by without a zero and are thus affine. The simplexes are thus conformal. But why?

The Lie groups can be thought of as those matrices which respect lengths, and thus the unit sphere. These are rotations. The entries in the matrices can be the real numbers, the complex numbers, or the quaternions. As the dimensions grow, the real number matrices need to be distinguished between the cases for the even numbered and odd numbered dimensional vector spaces. Thus the vector spaces need to grow by two real dimensions (An, Bn, Dn) or by four real dimensions (Cn).

Symmetries within a matrix.

{$D$} is the space of diagonal matrices.

The polytopes seem to match with the Lie groups as follows:

Note that Cn and Bn have the same Weyl groups.

Arnold, "Symplectization, Complexification and Mathematical Trinities", page 3. "So this list gives the classification of irreducible Coxeter groups which is one of the main classification theorem in mathematics." Footnote: "[Yuri] Manin told me once that the reason we always encounter this list in many different mathematical classifications is its presence in the hardware of our brain (which is thus unable to discover a more complicated scheme). I still hope there exists a better reason that once should be discovered."

David Corfield, Mathematical Kinds, or Being Kind to Mathematics, about systems by Arnold, Atiyah, and Baez and Dolan. In 1908, Henri Poincaré claimed that: ...the mathematical facts worthy of being studied are those which, by their analogy with other facts, are capable of leading us to the knowledge of a mathematical law, just as experimental facts lead us to the knowledge of a physical law. They are those which reveal to us unsuspected kinship between other facts, long known, but wrongly believed to be strangers to one another.

Corfield about Arnold In Lecture 2: Symplectization, Complexification and Mathematical Trinities, Arnold argues for a family relation between different geometries. He begins with the finite-dimensional geometries as given by Coxeter groups. So that there is an AA geometry and its sisters BB, CC and DD. He then discusses the infinite-dimensional case, where 6 family members can be found:

(According to Bryant’s lectures (p. 110), volume-preserving and symplectic each have an extension, geometries in which preservation is up to a constant multiple.) Arnold then looks for versions of theorems and constructions in differential geometry and topology for the two sisters – symplectic and complex geometry.

Finally, he moves on to describe various trinities, starting from (ℝ,ℂ,ℍ)(\mathbb{R}, \mathbb{C}, \mathbb{H}).