I wish to understand how all of mathematics unfolds, including its many branches, concepts, problems, methods and theorems.

This page is an overview of my investigation. 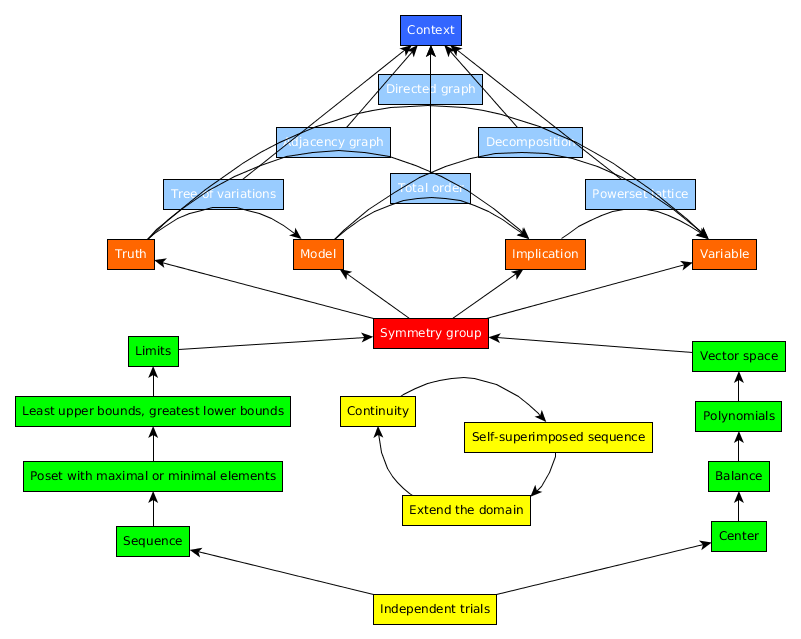 A system of ways of figuring things out

In 2011, I took a major step forward by collecting and systemizing the ways of figuring things out in mathematics. I wrote that up as a talk: Discovery in Mathematics: A System of Deep Structure.

I based the system of 24 ways on a database of more than 100 examples that I collected and organized.

I need to collect more examples and describe the 24 ways more precisely and rigorously.

I am also collecting and systematizing ways of figuring things out in neuroscience and physics. In general, my understanding is that every personality and every discipline has its own version of a system of 24 ways of figuring things out. I have systematized my own ways, and the ways of Jesus, the Gaon of Vilna, my choir director Dee Guyton, and CIA analyst Morgan D.Jones.

I have also systematized Gamestorming business innovation games. I used that data to gave a talk Games as the Foundation of Universal Grammar. That is an important talk for understanding the significance of this system and its inner logic.

Among all these disciplines, however, I believe that mathematics may be of special importance as the most formal epistemology, inherent in all of the other epistemologies.

The crucial knowledge gained from this system is that it clarifies which mathematical structures are cognitively natural, which is to say, the ones that we rely on in our mind, not on paper, not axiomatized. Also, it grounds a basic distinction between algebra and analysis, and it predicts that there should be four geometries/logics and six transformations between them. 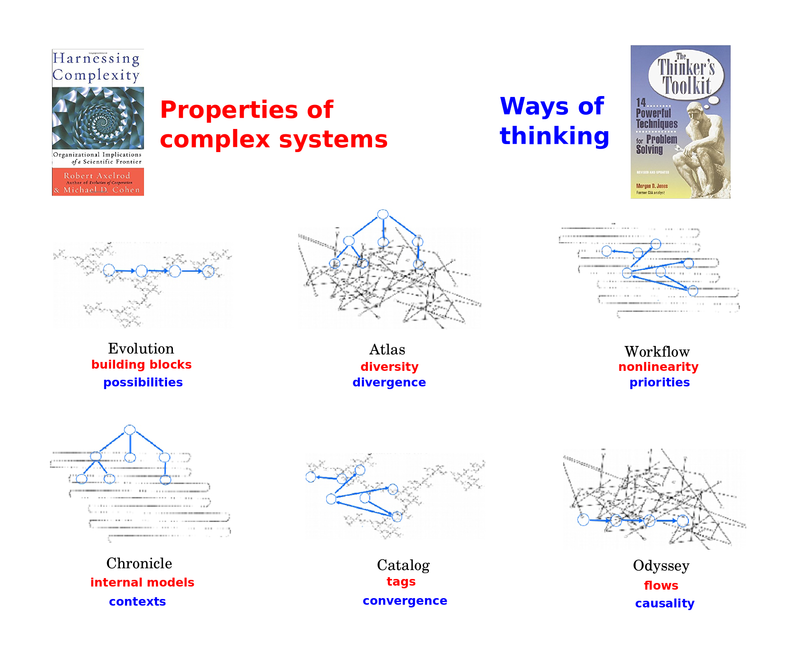 Related to six of the ways of discovery are the six ways of restructuring which I describe in my talk, Visualization as Restructuring and thus a Source of Logical Paradox, at the workshop on Logic for Children.

I should study further how they relate to the Zermelo Frankel axioms of set theory. 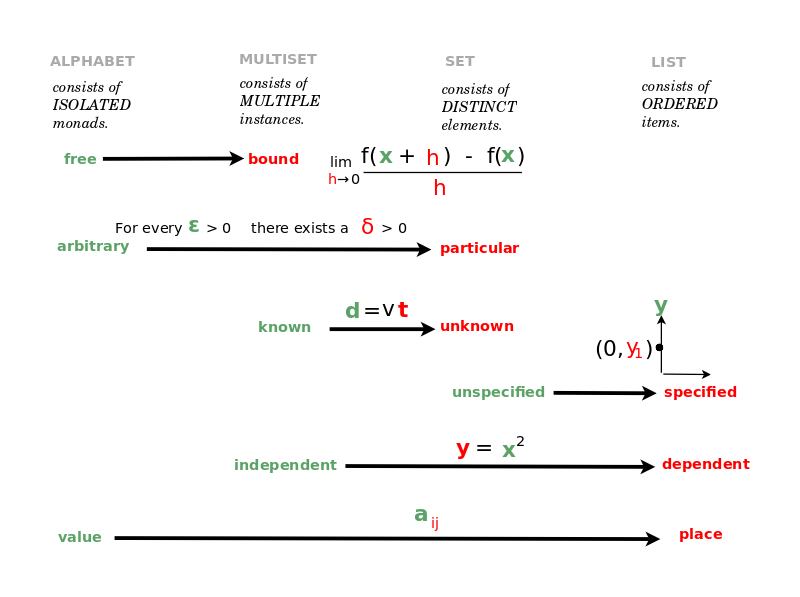 How the mind uses variables

One of the ways of figuring things out has to do with the use of variables. I pursue that further in my talk, A Structural Semiotic Study of How We Use Variables in Mathematics and Logic. 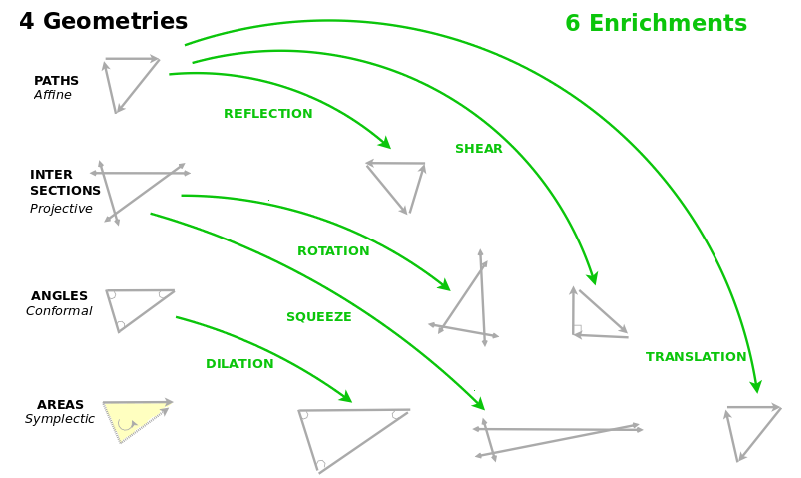 A geometry of moods

In 2016, I made another breakthrough that linked my theory of emotion with geometry, as in my talk, A Geometry of Moods: Evoked by Wujue Poems of the Tang Dynasty. I showed how we could study poetry to get knowledge about four geometries and six transformations which should be basic in human cognition and emotion. A related talk is Expecting What We Don't Wish: The Source of Anger, Hate, Relief and Depression.

At Math Stack Exchange, I asked if these six transformations were fundamental? Later, I realized that they express the subgroups of the Mobius group. 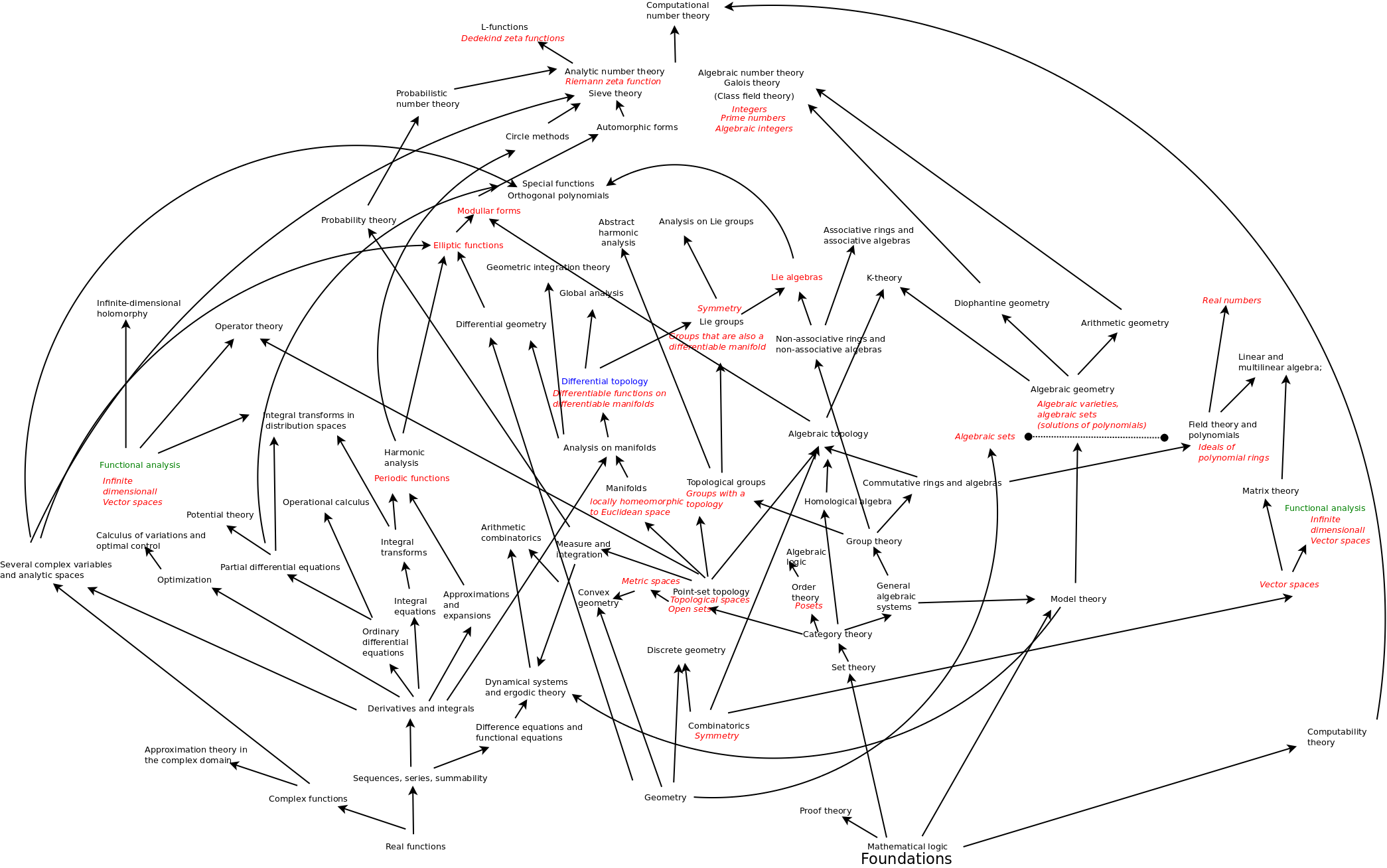 A map of mathematics

In 2016, I took up the challenge of trying to explain all of mathematics. I started by making a crude map based on the Mathematics Subject Classification, considering which area depended on which areas. A key conclusion was that Lie groups and algebras play a vital role in linking algebra and analysis. And they also are related to geometry.

I was curious if the four classical Lie groups/algebras could be the foundations for four different geometries: affine, projective, conformal and symplectic.

I phrased that question on Math Stack Exchange: Intuitively, why are there 4 classical Lie groups/algebras?

I have made a lot of progress. I wrote this abstract for Lithuania's National Physics Conference Combinatorial Interpretations Which Distinguish Observer and Observed.

Here is an abstract, Cognitive Investigation of the Mathematics Which Links Multiple Dimensions.

Also, I gave a talk at the Lithuanian National Mathematics Conference, which I am translating from Lithuanian: Combinatorial Foundations of the Classical Lie Groups and Algebras.

Very much related are the number systems: Reals, complexes, quaternions. It is very possible that the octonions are important but I am focusing on the simplest things for now.

I have set up a Math notebook where I work on my mathematical investigations. I also make up math exercises for myself to help me learn. 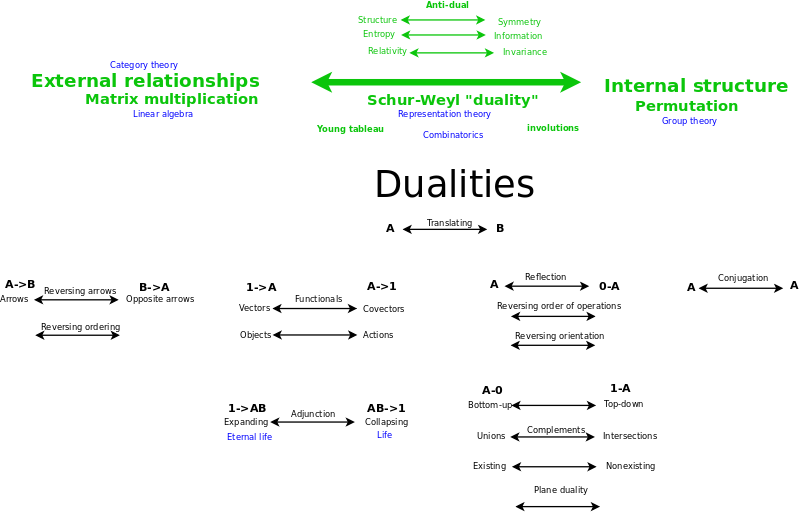 Another important idea in math is duality. I classified the various kinds of dualities. The classification shows that the Schur-Weyl duality which links matrices (external presentations) and permutations (internal structures) is of overarching importance. See also my abstract: Relating Metaphysics, Logic, Math and Physics with a Taxonomy of Duality.

Other links between math and my philosophy

The field with one element, {$F_1$}, has an element that may be interpreted as 0, 1 and ∞. This suggests that it is a model for a paraconsistent God as in "God's dance", which I describe in my talk, Imagining God's State of Mind As a Question: Is God Necessary? God's dance consists of 24 perspectives that are organized by the same structures as appear in "the ways of figuring things out" but pulled together in a different way.

The divisions of everything are the building blocks of my philosophy. I describe them in my talks, Time and Space as Representations of Decision-Making and Consciousness as the Social Awareness Schema of a Disembodying Mind. Here is an abstract: Divisions of Everything: Defining the Most Basic Definitions.

The foursome (whether, what, how, why) seems related to the Yoneda lemma. Also, Yates index theorem in computability theory seems to express the foursome. (It relates to the jump hierarchy.) Here is an abstract describing the foursome: Levels of Knowledge: Whether, What, How and Why.

The divisions of everything may perhaps be exact sequences of various length. A fiber bundle induces a long exact sequence in a way that brings to mind the endless learning process generated by a three-cycle.

My papers above on consciousness describe the divisions as organized by an eight-cycle with operations +1, +2, +3. So I think it is likely this relates to Bott periodicity and the clock shift of Clifford algebras.

Everything is divided into perspectives. Perspectives may be fixed points.

Grothendieck's six operations may well be the six representations of the divisions.

A more complicated composite structure, "the eightfold way", is basically the same as Fano's plane for the octonions, and also the Snake lemma.

An earlier overview of my math research, from 2018, is A Research Program for a Big Picture of Mathematics.

See also a list of my talks in English and an overview of my pages on math.