Syntax describes what we don't know. Thus it distinguishes the question asked (subject, topic) from the answer given (predicate, comment). Similarly, it distinguishes opening (noun), exploring (verb) and closing (evaluative).

Thinking jointly allows us to think in terms of the Other, the gap, Požiūris į Požiūrį į Požiūrį.

Thinking by ourselves - and listening to others - words fade in and out. The obligation here is not strong and so words can fade in and fade out. We can think without words - think visually, leveraging the surrounding environment, imagining possibilities and noticing associations and connotations. Thinking parallel thoughts - like waves that have constructive or destructive interference - that come in and out. Thinking in phrases, words, feelings.

You can't have a subject by itself - unless it's an explicit question like "What?" that leverages a context. You can't say "The railway station." But you can have a predicate by itself (if needed, using a dummy subject): It is wonderful to be here. Gražu.

The principal (only?) obligation is to answer every question. A question is the incomplete half of a statement. And questions are what allow us to complete each other, thus are the basis for thinking together, thinking jointly.

Separating the syntax game (organizing questions) and the semantics game (organizing answers). Thinking in parallel. And matching them at the end to meet obligations. But not necessarily one-to-one. Thus unfolding obligations to the listener. For speaking and listening is a joint activity, a joint intentionality.

Speaking gramatically gives you the right to speak nonsense semantically.

Speaking in full, grammatical sentences is a social obligation - all the more so in written form. Every language thus develops "obligations" that must be observed which keep the language from being trivial - gender, case, measure words - even Japanese has complicated honorifics. For example, in Chinese, measure words you can grammatically use "ge" but that would be considered impoverished and thus socially unsatisfactory, not in the spirit of the language.

Obligation to listen - to pay attention. Thinking together is joint thinking. Paying attention is an art where your attention can fade in and out, you can make sense as you go along, nailing it down, piece by piece. Also, you guess ahead what the person will say, and you then go back to what they actually do say. You comment in your mind on what they are saying. You converse with yourself.

The obligation is like economics, where the children are obliged to share the reward fairly and not with cheaters. The gap between syntax and semantics obligates us. We can be thinking as we're talking. They can unfold in parallel. Or we can think ahead of time and then say it.

Words are created by:

Mapping Kiparsky gradation to the three-cycle.

The Kiparsky mapping should relate to 12 cognitive prepositions

Bringing together unconscious (semantics) and conscious (syntax) with shared grammar.

Shared divisions of everything

Could the Basis for Language Be the Reduction of Vagueness In Order to Coordinate Activity?

We explore how we can derive various aspects of language by considering its original purpose to be the reduction of vagueness in order to coordinate activity.

Generally, in discourse, there is a remarkable agreement as to which words and sentences are spoken. Traditionally, linguists have supposed that language therefore conveys meaning through assemblies of well defined terms. More broadly, analytic philosophy, and more specifically, cognitive linguistics, have held such an outlook, which we argue is implausible, psychologically, phenomenologically and pragmatically.

Psychologically, the unfolding sense of meaning which we experience only loosely matches the flow of words that we speak and hear. Phenomenologically, speaker and listener are quite disconnected in what they personally feel. Indeed, thinking itself is extremely vague. And, pragmatically, people need not agree on what their terms actually mean, nor know themselves, for that matter.

Cognitive linguistics has reconsidered language in terms of thinking and so has developed an understanding of cognitive frameworks. However, these frameworks are still discussed from the prevailing point of view of assembling items. Thus, Langacker (2008) considers how we may conceptualize a drinking glass as a space, shape, container, instrument, material and so on. Instead, we suppose that the purpose of language is to coordinate activity. Thus we conceive of a world in which what is well defined are recurring activities. We pick things up and set them down; we drink liquids; we serve them to others. It is the recurring activity which determines what a "drinking glass" might mean for us. For example, we may be told to clean the glasses in the sink but leave the plates. Thus we have an activity of distinguishing glasses from plates. The implementation of such an activity can be particular to any individual. There need be no definition of what a "glass" is, nor what properties it has, but rather there is an activity of selecting glasses, which may lead to an ad hoc concept, or not. Architect Christopher Alexander (1979) has described how recurring activity evokes structure, and structure channels activity, yielding patterns - general "rules of thumb" - which come together in pattern languages. We can apply his thinking to linguistics.

The goal of language then can be to reduce the general vagueness of thinking, by a variety of strategies, for the purpose of coordinating activity, old and new. This is compatible with Tomasello's (2016) concept of joint intentionality. Working together with others, we must leverage general models of intention, attention, and serving the interests of others, for example, by appreciating status, as in who submits to whom. We must punctuate our actions, much as if they were sentences. Some strategies can be most abstract, such as dividing the vagueness of our minds into two perspectives, as when distinguishing construal and content. Other strategies can be familiar to us as transformations of our own self-identity. Thus we overview strategies which help us coordinate activity and we show what they might variously ground to make language possible.

I will briefly show why I am familiar with this structure and then I will show how it relates to games and what it means for linguistics. 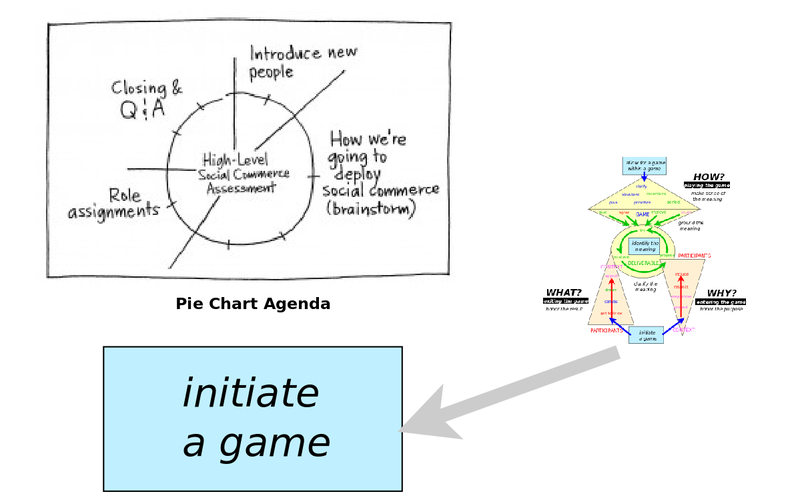 In my philosophical research, I have used hundreds of ways of figuring things out, and so I documented and systematized them. I came up with a tightly structured system of 24 ways. For now, I will just mention two of the most basic ways. On the one hand, we can isolate what is more important than anything else. On the other hand, we can be open to absolutely everything, no matter how peripheral. 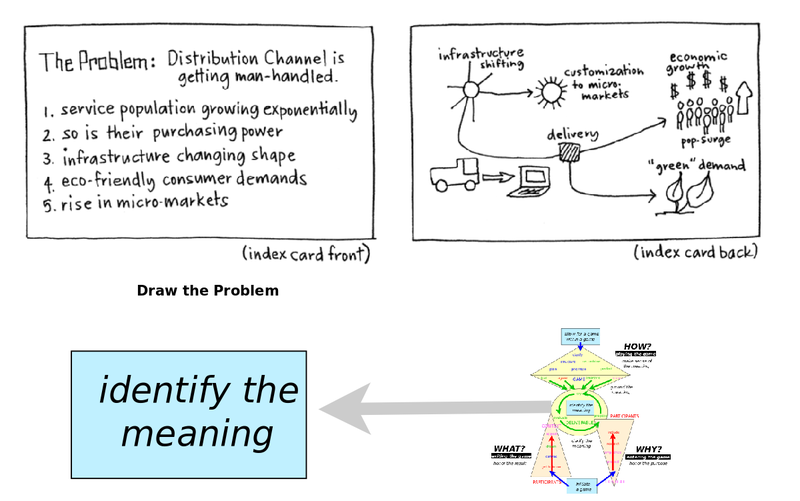 I will also mention how I systematized the ways of figuring things out in mathematics. On the surface, math is endless, but if we consider the ways we solve math problems, then our minds are quite limited. For example, consider Euclid's problem of how to construct an equilateral triangle given one of its sides. That is, given two corners of an equilateral triangle, how do we find where the third corner should be? The solution is to draw two circles and to see where they intersect. This is because each circle is a condition of where the desired point needs to be. The point needs to satisfy both conditions. And so our minds convert the surface problem - a geometry problem - into an underlying problem - a lattice of conditions. And such a lattice is a math structure that we use in our minds. 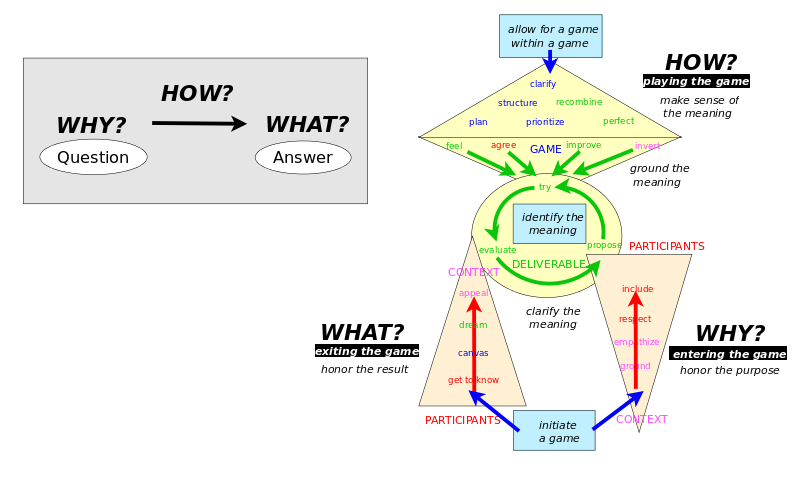 I analyzed about 200 problems and discovered and systematized 24 such math structures. They reveal the same system and I think that if we analyze any discipline, we will find the same ways of figuring things out, what I propose is the Universal Grammar. 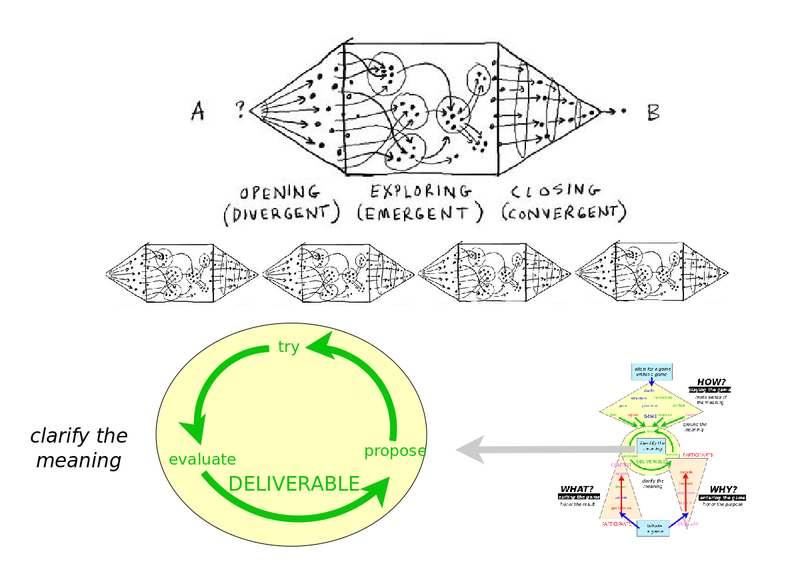 Finally, before I discuss the grammar of games, I want to mention an exercise of the imagination which gives rise to the major structural components. Namely, imagine God's point of view, what might motivate God, one who is prior to all things, to logic, being, meaning and so on? The only thing I can imagine is God asking himself the question, Is God necessary? Would God be even if God was not? We could say that this is the game that God plays. And so I imagine a proof by contradiction, where God makes the least likely conditions for his existence, namely us. But being God, he must indeed arise even so. But then how do they know they are the same God? It is because they understand the same thing. And so we have God who understands, God who comes to understand, and God who is understood. But this is from the point of view of God who understands, who declares "I am God", who initiates this game. What does it look like for the God who arose in the game, who declares "You are God"? Well, it looks like God went beyond himself into the game, so that the game expanded from nothing to something to anything to everything, and likewise, God inside the game goes outside of it. I can say briefly that we are dealing with the two representations of the Foursome, very much like the eight lines of Jesus's prayer "Our Father". And what does this relationship look like from the side, from the point of view that lens which equates God beyond the game and the Godlet within the game, for whom "That is God"? Well, there are four scopes where God beyond the game and God within the game can meet, and there are six gaps when they don't. And that's basically the structure of the Ten Commandments, four positive commandments to love God, and six negative commandments to love your neighbor as yourself. Finally, these three points of view are linked together in every three-cycle by which we take a stand, follow through and reflect, thereby relating the unity of God, the unity of an individual, and the unity of a community. I share this thinking to give a sense of the metaphysical abstraction that very well should be grounding the cognitive frameworks that make us human.