It is interesting that those who specialize in the study of time now accept a variety of understandings of time. I would argue for a variety of understandings of truth. The criticism of relativism is useful because the requisite complexity of a relativistic understanding of truth has not yet been clarified. I am personally interested in complementarity between different forms of truth rather than deducing from such complementarity an absolute truth which I can possess. It is a good question whether one possesses truth or is possessed by it.

Anyway my writings on truth are:

[http://www.laetusinpraesens.org/musings/liclass.php Complementary Truth-handling Strategies: Mediating the relationship between the "Last class" and the "Liar class"]

[http://www.laetusinpraesens.org/docs00s/horus2.php Complementary Patterns of Meaningful Truth and the Interface between Alternative Variants ]

[http://www.laetusinpraesens.org/docs00s/plastic.php Politicization of Evidence in the Plastic Turkey Era: al-Qaida, Saddam, Assassination and the Hijab]

[http://www.laetusinpraesens.org/docs/evidence.php Warping the Judgement of Dissenting Opinion: towards a general framework for comparing distortion in rules of evidence]

AnthonyJudge: I truly appreciate your initiative. From a methodological perspective I would offer the challenge of envisaging the mathematical/topological structure in which every perspective positioned in it would be right -- including the perception that others are wrong. A good example is when I phone my mother in Australia and she swears it is midday and I swear it is night. We are both right and both wrong -- the resolution is through the space on which we are respectively positioned.

I feel blessed that we have among us Tony Judge and his mind's boundless energy. In my understanding, he's dancing through all of intellectual space, fleshing out the various kinds of structural thinking that can be found in our lives. I myself tend to focus on how to sort through all that and put it all together. I suppose I would say that Tony is pre-sorting and it would be good for me to learn how to connect my efforts with his.

Recently, he's sharing his draft on "Extremism". http://www.laetusinpraesens.org/musings/extreme.php One thing that struck me are his thoughts on "degrees of extremism". For example, how might we rank Muslim extremists? This kind of thinking shows the problem of a simplistic approach to addressing extremism. It also reminds me of the picture I use for thinking about dissident movements. There it is important that supporters fill in the entire spectrum of dissidence, from most mild to most defiant. That makes it impossible for the tyrant to find a natural cutting point at which to isolate the extremists from the mainstream. It also makes it a moral matter for people to take risks in support of what is right no matter where they may sit on the spectrum. This kind of moral calculus makes the extremist outlook very natural and potent even when the issues at hand may be questionable.

Personally, I have a deep sympathy for extremists. All of my life I was raised to understand the significance of Lithuania's quest for freedom in the face of Soviet oppression, and I am ever amazed by the miracle that we became free in my lifetime. Our whole lab is based on the observation that independent thinkers always end up in the periphery because the center is taken by those who accomodate each other superficially.

For me, nonviolence is part of my faith. So I look at violence with respect as I would a person of a different faith. In particular, the idea of noble action seems important in trying to make sense of violence. As Tony writes, there is a sense in many cultures of "rooting for the underdog". I was raised in American schools and Lithuanian Saturday schools that it was noble for snipers to shoot redcoats, or to dump the tea in the Boston Tea Party, or to say "Give me liberty or give me death!", or to drop the bomb on Hiroshima, or for Lithuanian warriors to kill themselves, their women and children rather than give them up as slaves to marauding Christian knights. And it was noble for Lithuanian guerillas to blow themselves up with hand grenades so their faces would not be recognizable in the market square when the Soviets lay them and force people to look so they could see who would cry. And it was noble to kill as many Soviet soldiers as you could in the process. It was noble for Muslims to use US Stinger missles to shoot down Soviet aircraft. I don't see why it wouldn't be noble for somebody to shoot down Amercian aircraft if they felt that America was an oppresive power. I never understood why Pearl Harbor was not consider noble. I never understood why Iraqi military casualties don't weight on us but American military casualties do. I don't quite accept the distinction any more between soldiers and civilians. Why is it more noble to kill soldiers rather than civilians? Don't soldiers have children, wives, parents? Don't they die just as helpless? Can the decision to join an army (with all its implications) ever be fully thought out, ever be truly willful, when we are so ignorant of war and its effects? Isn't the source of the current strife the free trade between the consumers and producers of oil? Wouldn't it all stop if we chose (or required ourselves) to be self-sufficient in energy? And who is in charge and why aren't they taking responsibility? Isn't the gigantism of the oil industry and the resulting giant flows of capital precisely what is needed for rogue princes to fund themselves? As the cost of destruction shrinks, wouldn't we want the flows of capital to shrink as well? Wouldn't it make more sense to live in a land of lakes than on an ocean front waiting for the inevitable tsunami? And why are the lives in rich countries so vastly more important than those in poor countries? Why do a few thousand deaths get so much attention when a few thousand die every hour? When hundreds of thousands are washed away by a tsunami? Or millions die of painful diseases? "Saul killed thousands, but David killed tens of thousands" as the Bible says. Terrorism was a part of the struggle against apartheid in South Africa and the struggle of Jewish partisans against the British army in Palestine. There is a thoughtful articile at Wikipedia: http://en.wikipedia.org/wiki/Terrorism Perhaps we might respect terrorism enough so that we might distinguish within it, just as we respect nuclear weapons programs enough so we might have degrees of acceptability. Perhaps that is what I mean by nobility - that improper means such as violence may yet, if accepted as such, allow us to look for other qualities that do have merit, including a truthfulness to one's self and one's cause. We may see shades of grey that shine even in the darkness. And that helps us see the spectrum of humanity as it extends even into violence. It gives us a way to engage each other, whereas vilification does not.

In pagan days, there was a Lithuanian duke Kestutis who would announce to the Crusaders when and where he would fight them. And he always showed up on time. And he would berate them if they showed up late. They ended up respecting him greatly. I think that all put their cause in perspective and helped point to a deeper humanity.

I share an excerpt from Tony's draft. It's wonderful that he places his work in the Public Domain!

I have also created a link from our wiki page:

Anthony Judge wrote: > Greetings > > You may have some interest in the newly posted paper of mine > entitled: > > Global Struggle against Extremism: from "rooting for" extremism to > "rooting out" extremism > http://www.laetusinpraesens.org/musings/extreme.php > > Regards > > Tony

[http://www.laetusinpraesens.org/docs00s/cardrep.php Sustainability through the Dynamics of Strategic Dilemmas in the light of the coherence and visual form of the Mandelbrot set] by AnthonyJudge, 7 March 2005 | Draft

The following points endeavour to provide a rationale for the approach taken:

See web resources in the above table.

The M-set can be divided into an infinite set of figures (typically represented as black, as in Figure 1) with the largest figure (in the center) being a cardioid. An (infinite) number of circles are in direct (tangential) contact with the cardioid -- but they vary in size, tending asymptotically to zero. Each of these circles has in turn its own infinite set of smaller circles in contact with it, and these surrounding circles also tend asymptotically in size to zero. Repeatedly indefinitely, this branching produces a fractal. In addition the M-set is characterized by filaments or tendrils within which some new cardioids appear, not attached to lower level "circles". [more]

This is an exploration of how significance is associated with being what is metaphorically described as "straight" (or droit in French) as opposed to being "bent", "twisted" or "warped" -- notably as in "going straight". Following the French, this may well be interpreted as "right-thinking". Specifically it is concerned with how higher degrees of "twistedness" are encountered in social interaction and in arguments in support of certain strategies. Is it reasonable to expect a straight anwer to a straight question under such circumstances? What might be the nature of questions and answers of higher order?

The aim in this exploration is to recognize how twistedness works and the conditions under which its complexity is of "positive", as opposed to "negative", significance. This argument aims to clarify the nature of more complex forms of understanding that may appear "twisted" to others and may, or may not, indeed be usefully associated with "richer" or "higher" forms of cognitive insight --whether exemplified by "holiness" or "perversion". The argument relates to structural insights summarized in a separate paper (Strategic Opportunities of the Twice Born: reflections on systemic camouflage of mass deception, 2004).

The approach here is through two lines of exploration. The first is through the extensive work on the phenomena of coiling and knottedness that are fundamental to magnetic, bio *** and specifically to DNA replication. The latter is related to the preoccupations of biosemiotics. In this connection, it is also appropriate to note here the importance of various forms of "coiling" in the symbolism of different cultures, whether the caduceus, the ourobouros, or more generally the coiled snake and its "satanic" associations dating back to Adam and Eve. The ambiguity of serpentine associations is illustrated by the symbolic status of Moses's Snake: "Just as Moses lifted up the snake in the desert, so the Son of Man must be lifted up, that everyone who believes in him may have eternal life" (John 3:1-16 ).

The second approach is through a review of current investigations into the taxonomy of questions and the insights of work of Arthur Young (The Geometry of Meaning, 1978; The Reflexive Universe, ***) as a template for interrelating higher order questions beyond conventional taxonomies.. 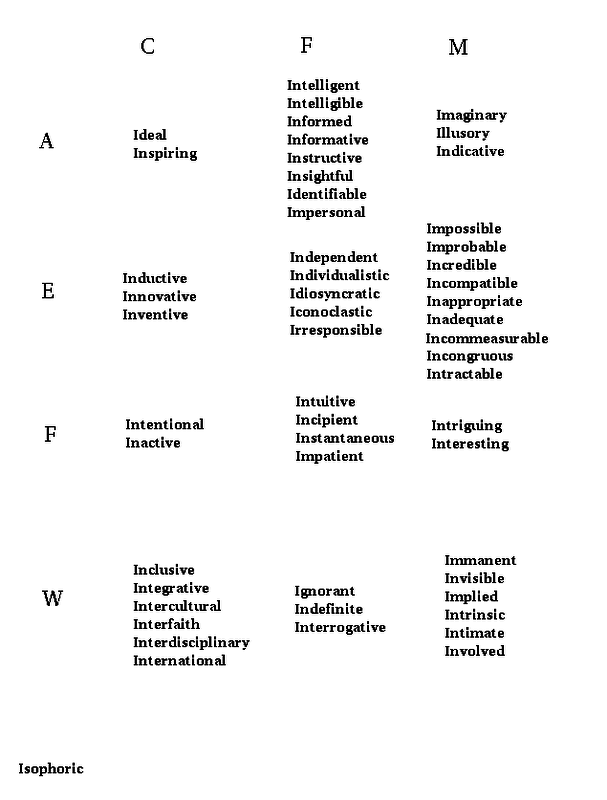 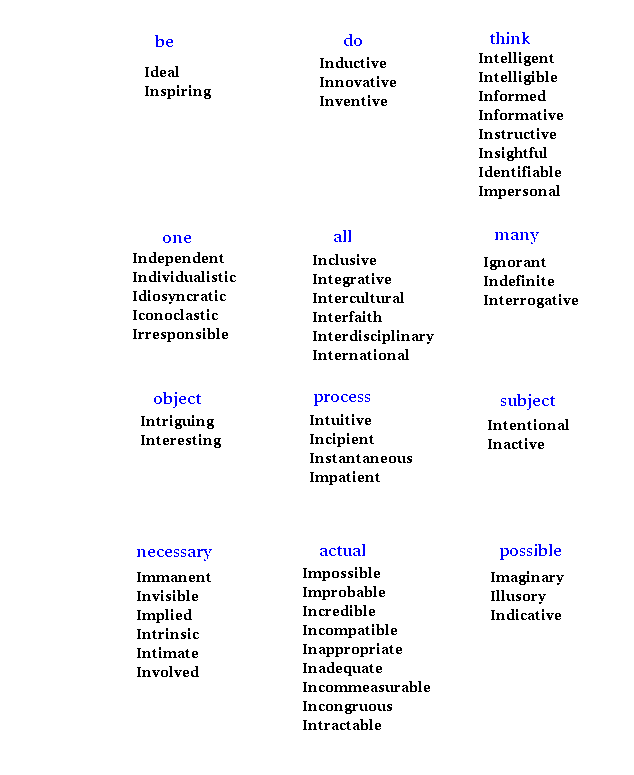