This year I have been trying to find the end of the string that ties it all together. The unfolding is driven by God's going beyond himself. But what in his nature most deeply compels him? For example,

and so on. What seems to be at the heart is that

I'm still not sure, but it is emotionally meaningful, morally satisfying, structurally fruitful and also scripturally central given Jesus's personal prayer to his Father in the Gospel of John where he speaks of "love" and "being one with" as if they were analogues. Perhaps "being one with" is a premonition of "love" in the sense that I will explain below.

As I swirled inward looking for the starting point of it all, I recognized that I should distinguish

which I was seeking. The structural facts about our minds were there to be explained regardless of any theory. Although a successful theory might make those facts much more evident. But what I am doing now is seeking a theory. My instinct is that God (to be defined or not!) is at the root of it all. Whether or not God exists - and I think God is prior to matters of existence - but my theory is that if we can take up God's point of view then we can indeed know everything and apply that knowledge usefully.

You might imagine, the closer that we get to the starting point, the more we have to let go of all of our presumptions and contexts. Indeed, our greatest presumptions must be built into the starting point. So as I kept rethinking the starting point I wondered maybe Theory itself is the starting point because that is what I am seeking and is the context in which I am working. Then I recalled the beginning of the Gospel of John: "In the beginning was the Word, and the Word was with God, and the Word was God." http://www.ebible.org/web/John.htm And in Greek the "Word" is Logos which has many interpretations. But I thought, what if Logos means Theory? And that seems quite plausible. http://en.wikipedia.org/wiki/Logos And there is a supposedly literal translation of the Greek: "In beginning was the word, and the word was toward the god, and god was the word". From my point of view this would say: "In the beginning there was the Theory, and the Theory (was embraced by? or went beyond itself to?) God, and the God was (defined as?) Theory." In the Christian faith, the Logos is identified with Jesus Christ, the Son of God, which might make sense in that Jesus is the perfect person in theory - the organizing principle for our universe - who was then realized in practice.

This allows God - or the root of it all - to be considered as the Theory such that:

This opens up a role for us as those in NotBeingOneWith who can meet with BeingOneWith and enter into it, link up our perspective with its perspective. It also provides a stark moral choice between "living with a theory" and "living without any theory". I suspect that the latter option ends badly, but this may very well be life's question. And perhaps a more troubling question is, if we "live with a theory" (a god), then must we "live with a Theory" (a God), which is to say, live by a comprehensive theory?

I also noticed that the most explicit, developed structures (divisions of everything, topologies, representations) were at play from the very beginning in the unfolding of structure. But I realized that they could be thought of as premonitions of what was to come and only realized themselves as Definition itself progressed from soft to hard. And I saw that this progression could be measured by the Scope given by the overlap of BeingOneWith and NotBeingOneWith so that at the beginning they are the same and the scope is Everything, but as Truth hardens, they become separate and the scope is Nothing.

I then looked at the different fundamental concepts that were relevant to explain the unfolding of the structure. The notion of Conditional and Unconditional was quite central but I realized that this could be driven by the perspective of NotBeingOneWith. There were also concepts that played off both oppositions (+/- BeingOneWith and +- Unconditional), namely:

and these are organized by the diagram I wrote about earlier regarding Experiencing and Understanding at http://www.worknets.org/http://www.ms.lt/livingbytruth/?page=LivingByTruth/Overview 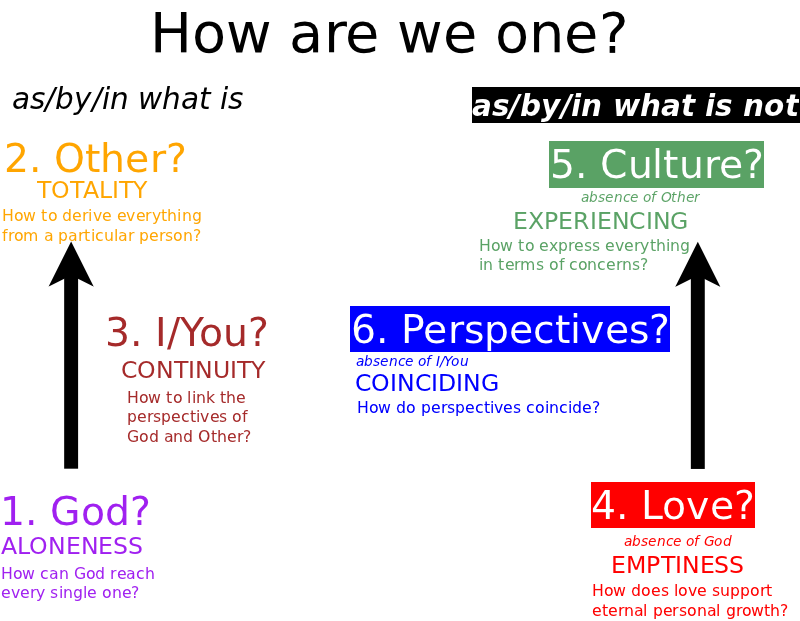 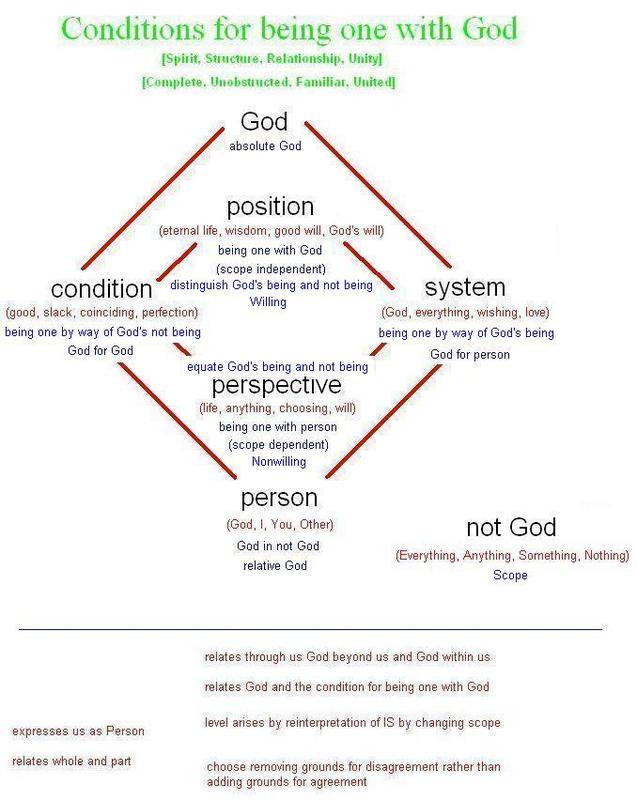 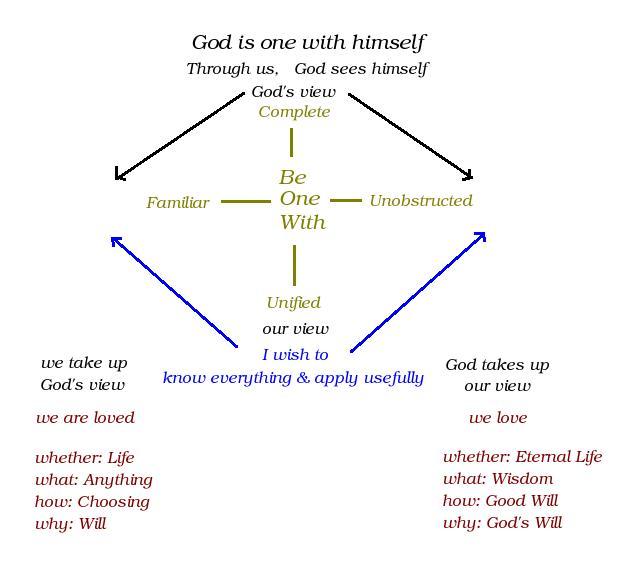 ===Notes on BeingOneWith from Overview===

The following are all ways of being one with:

One concept that I'm finding important is "scope". It allows me to consider an "X", for example, "to love X", or "to be one with X". So it is an important part of having a "calculus".