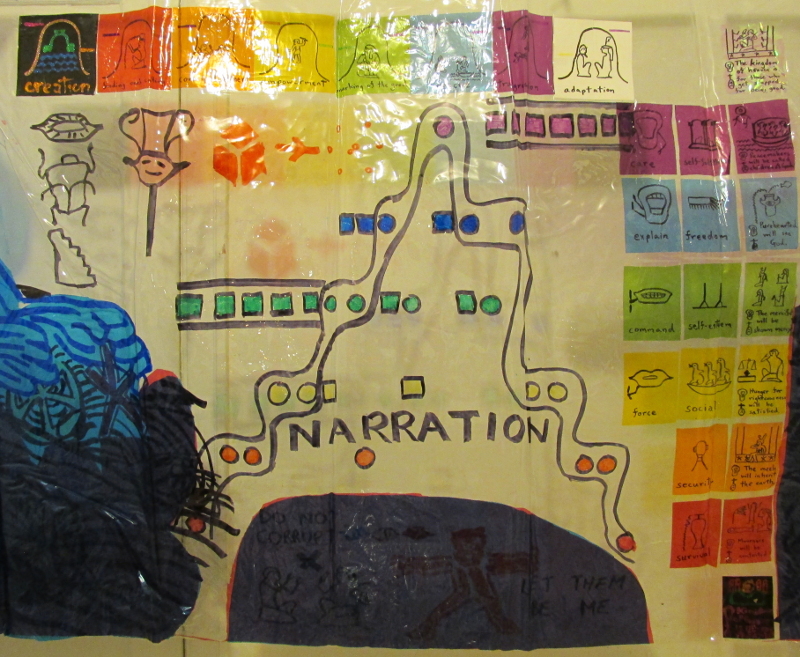 See the paper A theory of narrative structure based on a study of Lithuanian folk tales by Andrius Kulikauskas, 1993

Narration is one of the three languages. A basic unit of narrative is given by the creation and relaxation of tension. The creator of tension has available four voices: forcing (III), commanding (IV), explaining (V), caring (VI). There is a constant voice of tension at the beginning of a narrative, and a constant but different voice of tension at the end of a narrative. Seven narrative shifts are observed, each yielding a different narrative content, as follows: IV to V marking of the good, V to IV calling, IV to VI transgression, VI to IV empowerment, V to VI coming together, VI to V rescue, III to VI adaptation. An eight narrative is conceivable, but not observable: VI to III creation. [9/99, Andrius Kulikauskas]

The seven narrative types are simply the empirical result that I got from analyzing eighty Lithuanian folk tales. In my paper, I write about the six tones of voice: I, II, III, IV, V, VI. There is a consistent tone of voice for the creator of tension at both the beginning of a story and consistent but different tone of voice at the ending of a story. Apparently, the two tones must be different for us to feel that something has "happened". In fact, they determine what it is that we perceive to have happened. Actually, in very long stories (and very few folk tales) it is possible to have a series of tone changes, such as IV-V-VI-IV. Such a story can have multiple interpretations (in this cas IV-V or IV-VI or V-IV or VI-IV), depending on how we think about it, and yet we can't interpret it as "flat", we need to feel a shift. So how many story types are there? Well, the lowest two tones of voice are apparently too basic to create tension. The first (I) simply indicates that the character has a physical presence, and the second (II) indicates that they can be obedient. If we look at the heighest three tones of voice IV, V, VI, then we find that we get all combinations between them: IV-V, IV-VI, V-IV, V-VI, VI-IV, VI-V. Finally, I found the voice III as a creator of tension only in stories of the form III-VI. This is a story of adaptation (like a wedding story such as "Egle, Queen of Snakes") where forcing gives way to caring. Each of the story types seems to accord with a sacrament (a marking of a change in state, an anthropological rite). For two people to be united as one, they must be brought together by force (preferably the force of romantic love, although arranged marriages, destiny, genes, shotguns all seem to work at times), but then the tone must shift to one of caring for the union to happen. In the paper, I write about some of the problems with observing the voice III because "forcing" needs to be infered, it can't quite be recounted directly. Perhaps for this reason it needs to be compared with VI, the voice most removed from forcing, so that the difference is clear. I also believe that there is an eighth story in the reverse direction: VI-III whereby God so cared for the world that he forced it into being. (Or perhaps, more relevantly, the world so cared for God that he was forced to be.) This would be the sacrament of creation. This kind of structure of size 6 + 1 + 1 is very important. http://www.openleader.com/index.php/GlossaryOfStructure/PrimaryStructures I will be writing more about them. Yes, please keep asking questions as they come up.

JosephGoguen: in science generally, and in linguistics in particular, "empirical" means there is some definite method, based on some assumptions and theory. for example, grammar generally assumes that words are organized into clauses with relationships of subordination, and that these structures can be justified by pauses in speech, by substitutivity relations, etc. discourse theory makes similar assumptions. so i think what fox wants to know, is how do you justify your choices of categories? one might also ask what questions the theory is trying to answer, i.e., what is it good for? our interest just now is mainly in computer-based synthesis of narratives and multimedia events (such as games, information kiosks, interactive greeting cards, ...).

AndriusKulikauskas: Hi Joseph, [http://www.ms.lt/en/investigations/narration/ My paper] describes the nuts and bolts of my empirical method.

9]: describe how to break up the interpretation of a story into narrative units where tension is created and relaxed.

13] through 20: explain how to assign a tone of voice to the creator of tension. In Lithuanian folk tales, it would be:

The above lists are "empirical" in the sense that they were put together based on the hypothesis that the tone of voice creating tension is constant at the beginning of a story, and constant but different at the end of a story. In other words, the actions above go together. The hypothesis can be tested in a variety of ways. Where it holds, as I have found it to hold upon examining eighty Lithuanian folk tales, then it can be used to build up such lists for any collection of narratives.

Furthermore, such actions should correlate highly with words, phrases and punctuation marks in the text. For example, a question mark "?" will indicate a voice VI, more likely than not. It should be possible to assign to certain words (like "cry" or "ask" or "help") the probability that they are signifying a particular voice. So this means that a computer program could read a text and spit out a diagram like the one I have on page [

Because the tone of voice is so consistent at both the beginning and at the end of a story, it is very easy to read such diagrams. Furthermore, from the diagram it is possible to know the overall content of the story, without having heard any part of it. In the above diagram, the story starts with "commanding" and ends with "caring". All such stories are "transgression" stories.

Furthermore, if a story starts with "commanding", there are only two ways that it can conclude and resolve itself. It may switch to "caring", and be a "transgression" story. Or it may switch to "explaining", and be a story of "marking the good", like Cinderella. But there are only two possibilities here! So, in a sense, this yields a way to "predict the future". Or at least to know how the possibilities branch out.

I suppose it would be meaningful to somehow quantify the story types above. But I simply assert that, within each group, the similarity of the stories is striking, especially with regards to their rhythm, their trajectory. Perhaps you can imagine it. So, for example, rescue stories are set up with a very persistent "caring" and then end up with a neverending "explaining" that goes back and forth - the witch is about the catch the young maiden, but her brother ravens are on their way, etc., etc. Alternatively, a story may start with "caring" and then the nurtured young hero ends up "commanding", battling and defeating the villain, etc., as in Propp's structure. Metaphysically, the alternative seems stark - if you are one to be nurtured, then at some point you will either need to be exposed to the help of others, or you will need to help others and yourself.

The overall purpose of this theory is to explain "how do things come to happen". Which is to say, why do we feel that something happened?

What is certainly empirical are the catalogues for the tones of voice. And they can be created for any collection of texts. They may in some sense depend on culture, and they may also have universal aspects, this is also a tool for studying that. Is "crying" interpreted as "commanding" in all cultures? We can collect data and write computer programs to answer such questions.

But if this theory might be relevant to Fox's work, then I am very interested to pursue it further. It might help to choose a set of texts (perhaps something in the Public Domain), perhaps the classic Grimm tales and/or those of another culture. For me, the theory is "practical" in that it models how a person can draw a tangible feeling conclusion from a string of data which may include lots of noise. It explains useful things to know in telling a good story, especially the importance of maintaining consistent tone, but also the necessity to shift tone so that the beginning and end are different and that we feel "something happened". I suppose it also suggests how to behave chaotically so that we feel "nothing has happened".

Narratology: The Form and Function of Narrative by Gerald Prince.

Life Stories: The Creation of Coherence, by Charlotte Linde, 1993.